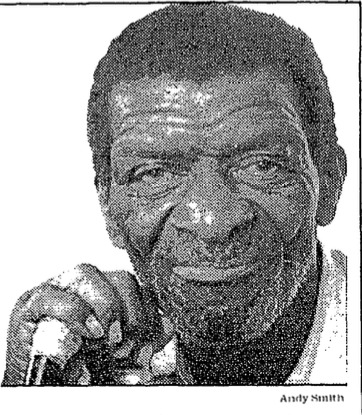 Picture of an aged Andy Smith

Who is remembered and who is forgotten? This is core question for every historian to consider. Markers of memory abound on the landscape to remind us of important people and events yet there are countless hidden histories of people and our community that remain unseen. This project emphasizes one of these people and suggests that in order to begin the repair and healing in our community to begin we must recognize wrongs committed and also explore lives which were well-lived. This work will focus on Andy Smith. 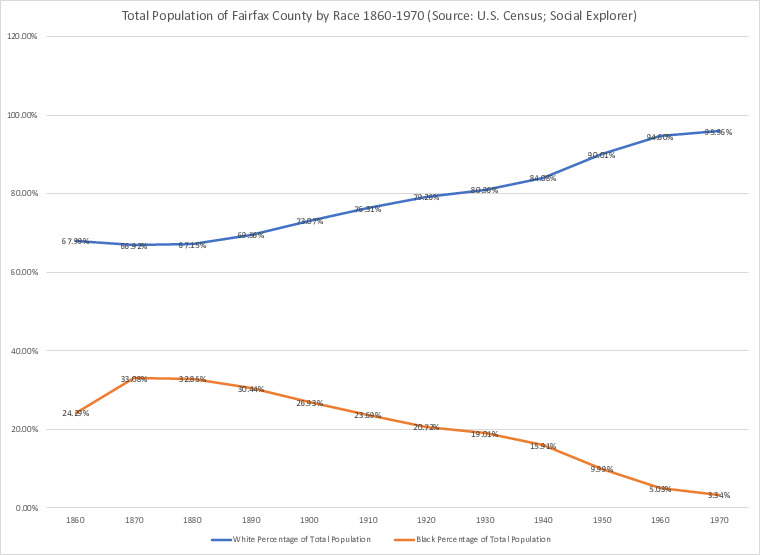 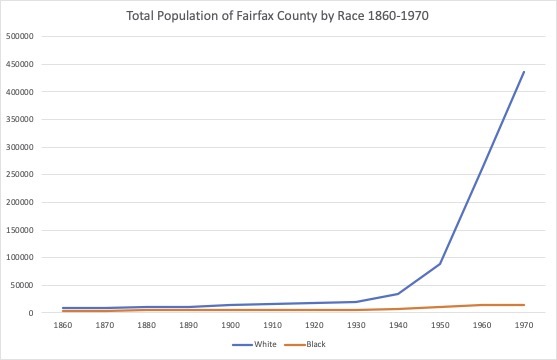 Graph shows the total poulation of Fairfax County by race between 1860-1970.

In 1910 Fairfax County was dotted by 20,000 people. About 4,900 (24%) of these residents were Black. In 1920, the Black population dropped to 20% and then declined further over the next decade. A notable demographic change occurred between 1940 and 1950. In 1940 there were 41,000 in the county. Statistics for that year show that the Black population declined to 16%. A decade later, following the end of WW II, 99,000 people were counted by census takers; Black people comprised 10% of the overall population. By 1970, 455,000 resided in the Fairfax region; almost all of them were recorded as white inhabitants. The Black population had plummeted to 3.3% in 1970. That year marked the start of the last decade of Andy Smith's life.

The numbers referenced in the preceding paragraph raise a crucial question: How did Andy Smith manage to stay in Fairfax for so long?

The Smith family were long-time residents of Fairfax County. Like many African American families in the Jim Crow South, they seemed to live a precarious life. Andy’s father, Alfred Smith (1870-1916), and his mother, Margaret Ella Johnson (1869-1945), had ten children.[1] At some point, the family  purchased a cabin in the Fairfax Station area. Census data reveal that they owned this dwelling.[2] Little is known about Andy Smith's mother Ella, as she was affectionately known, except that her profession was listed as a housekeeper.  Her death certificate, filed in 1945 after she succumbed to pneumonia, corroborates these biographical details.[3]  Her husband Alfred Smith was a day laborer in 1900. Ten years later census records show that he worked for the railroad (no name for the employer is given). Alfred Smith died of enteritis in 1916; he was buried in Clifton Cemetery fifteen miles from George Mason University.[4]

The William Smith Family in the 1940 Census. Smith owned a house valued at $2,000 and earned $9,000 per year as a laborer for the state highway authority.

The census helps to tell the Smith family story.  William Smith, the oldest son of Alfred and Ella Smith, married Lillie May Jones in 1920.  By 1930, William and Lillie Smith were residing at 129 Lee Highway with their three children, two nephews and one niece. In 1940 William Smith was employed as a state highway laborer, earning $900 annually. He and his wife and other kin lived on 278 Centreville Pike in a home valued at $2,000. Lillie Smith made $300 per year doing “day work” for private families. William and Lillie Smith dwelled with their twenty-three-year-old son Benjamin and twenty-six-year-old daughter Wanda, her husband James Wilson, and their one-year-old son named Brother. Benjamin Smith worked as a houseman 40 hours per week, earning $300 annually; his son-in-law James Wilson labored for local farmers, making $500 per year.5 The Smith family members were employed in low-paying jobs and resided together in a capacious household, probably to make ends meet.

Andy Smith, too, experienced economic marginality and lived with different relatives for extended periods. In 1940 the census reveals that he was a general laborer who resided in the same house as his mother. Andy Smith's reported 1939 annual income was $312. A local historian discovered that Andy Smith was employed for a time by Dr. Frederick Mortimer Brooks who owned on Route 123 (Ox Road) opposite today's Country Club of Fairfax one mile from George Mason University.

Eventually, Andy Smith worked for family members of Wilson M. Farr and came to live on the land that would become the campus of George Mason University.

[1] Much of Smith’s story is recounted in a very useful article by William Page Johnson II, “Andrew B. ‘Andy’ Smith: A Legacy in a Gesture,” The Fare Facs Gazette: The Newsletter of Historic Fairfax City Inc., Vol. 15 n.3, Summer 2018.

[2] 1920 U.S. Census, Centreville, Fairfax County, Virginia, population schedule, p. 15A Enumeration District 26, Ella Smith Household, Robey’s Mill Road, NARA microfilm publication Roll T625-1886, Ancestry.com. The 1910 census shows that the Smith family lived in the same dwelling; the owner of this property is not recorded. The 1930 census and 1940 census indicate that Andy Smith owned this same home.  Its estimated worth was $200,